A FASHION EDITOR TURNED HEALTH AND PROFILE WRITER? BELIEVE IT.

If fashion fixation had rehab, I would've been committed in childhood. The daughter of a fashion retailer from London, I grew up reading the trades and signed up to attend Paris collections at age 10. Not that my allowance covered airfare.

Cut to post-college, when I became a full-time fashion writer, editor and photo stylist.

But I'm also more than a pretty dress.

While working at major newspapers I sought every beat, so I'd be versatile later as a freelancer. Since then I've honed my specialties to include profiles, health articles and interior design writing.

The determination, curiosity and adventure that spurred me to style a fashion shoot in the middle of Parisian rush-hour traffic also led me to dodge bullets in Belfast, be shaken by a major Mexican earthquake and invite a murderer’s mom to an interview because I figured the pizza chef wouldn’t kill me in front of her.

Hire me and I’ll give you the deep dish.

Contributor to a Pulitzer finalist, I also work as a profile writer and B2C/B2B content writer, strategist and ghostwriter on: 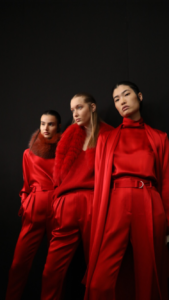